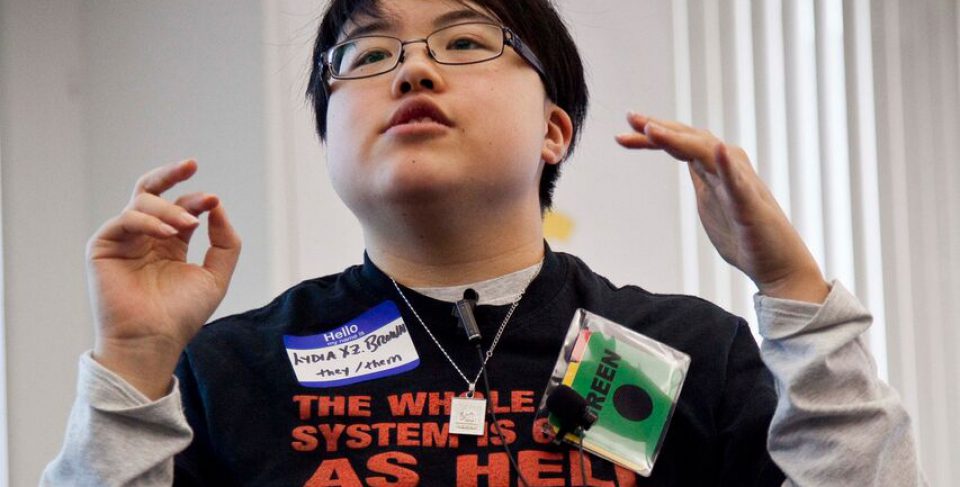 Home » transcript » [Transcript] Intersectionality for Beginners (Women of the World 2017)

[Transcript] Intersectionality for Beginners (Women of the World 2017)

Note they cut out the parts of my keynote where I named and honored many of the amazing disabled activists, organizers, and advocates who I learn from, but among those were Kay Ulanday Barrett, Leroy F. Moore, Jr., Nai Damato, Talila A. Lewis, Mia Mingus, and Shain M. Neumeier, all of whom are awesome human beings.

LYDIA: The work that I do is rooted in a practice of disability justice. Disability Justice is an imperative of intersectionality. Disability Justice is the art and practice of honoring the body. Intersectionality, as coined and intended by the Black feminist and womanist scholar-activist Kimberle Crenshaw, is the deliberate thought and practice of understanding that oppression comes in multiple forms that do not simply add together one plus one as though you can check them off from a box, but rather inform one another, creating new and particular experiences of oppression that cannot be easily conceptualized by linear narratives. This is oppression that, for many of us, we live in our bodies.

I ask us to tune in to our bodies, because to honor the body means not just the abstract or the theory. We have invited certain people to this room; we respect certain people; we attempt to use inclusive language — whatever the hell that means. But it also means the art of honoring the bodies that we occupy, allowing ourselves to exist and to take up space. To affirm that those who are the most vulnerable, the most traumatized, the most impacted, are valuable and valid and magnificent and beautiful.

The work that I do is informed constantly by the labor, by the active love, by the fire and the resistance of my comrades and my colleagues. We do not do this work alone. To do work intersectionally means not only to acknowledge superficially that we each have different identities and experiences, and that the whole of those make us who we are, but rather to honor the full complexity of each and every one of us. There are untold numbers of people doing this work, often not recognized, often expected to give untold amounts of free labor for everybody around them, often not named, often isolated and disconnected even if visible, even if known. Disability Justice calls us not just to acknowledge somebody’s existence, but to work to create activist communities and movements that fight isolation, that recognize isolation as a form of abuse and violence, that recognize that honoring the whole humanity of everyone is indispensable and is vital. In a world of justice, in a world of active love, in a world where the whole humanity of everyone is honored and valued and treasured. This is Disability Justice.

GUPPI: The work that I do is ultimately supporting organizations and NGO’s who are trying to do social justice work but are doing it exceptionally badly. So are hurting people, and are putting the wrong people in the front of the movements, taking up space, putting resources in the wrong places, and I’m just trying to challenge them. So I try to do that publicly and privately, and then make space for the activists on the ground who are doing the really great work and who have the right stories to tell, and have really do, and really bringing intersectionality into their activism, which is a kind of strange role to play.

But I now realize that as someone who has quite an incredible amount of power in the social justice organizing space, I want to be using that power well. And so I guess, as I said earlier, as the “nervous white woman on the panel”, as kind of a term I’ve used for many people that I’ve met over the last few years in activism, and nervousness really freezes you, but I’m trying to support those to get out their nervousness and actually do something, but also do the right thing when it comes to leading the social justice activism.

KUCHENGA: As trans women, we’re victims of state violence, interpersonal violence, sexual and domestic violence, socially sanctioned violence. And I had a moment during Lydia’s amazing speech where I was stilled by that fact, that for me as a transwoman of color to desire a long, healthy life full of meaning is asking too much. I feel so powerful to be sitting up here as a thirty-one year old transwoman having gone through all of the things I’ve gone through, and a little too exceptional. And, you know, I’ve been very honored to be part of movements that are living and breathing intersectionality, that being Black Lives Matter UK, the work of Sisters Uncut has been, yeah, it’s been incredible. I’m also, I’m a member of the Bent Bars Collective that writes to LGBT people in prisons.

And I think, I am so grateful to the work of Black feminists who are alerting me that another world is possible. Angela Davis speaking later, yeah, her work talking about the prison-industrial complex and looking at these issues in a macro sense. But I’m also aware of what’s taking place in our national media. I’ve been so discouraged by frightening, fractious contributions of Jenni Murray and Germaine Greer, who I feel, with their biological determinism, they’re really working against transwomen being able to stand in solidarity with all women. You know, we’re really, yeah, it’s just, it’s really weird to feel so betrayed on a regular basis, particularly when we’re going through so much. So yeah, as bell hooks [unintelligible] told us, feminism really is for everybody. And as we move forward, let’s make sure that no woman is left behind.

ELEANOR: I know so many disabled people and women who have said, because of the cuts in this country, that they can’t protest the way that, you know, that we’ve seen so many marches and so many demos. And they said, because there are, because of their mobility issues or mental health issues or other issues, they can’t be part of that demonstration even though it means a lot for them to be there.

I’m so glad that Lydia talked about all those who are also activists, activists in the active pursuit of existence. For me, they’re the heroes. They’re the ones who have to fight. They’re the ones who are getting targeted by our Department of Work and Pensions who says that they don’t deserve to live. Basically, that’s what it means.

EMMA: Some, some argue that intersectionality has been mainstreamed in the past two decades, and it’s become a way to manage difference that actually colludes with dominant forms of liberal multiculturalism. I can say I’m a Black woman, and as a result of that, I’m particularly marginalized. There are marginalizations that I experience, but there are also privileges I experience.

I was, when we think about generative justice, which I’m going to explain to you in a moment, which is kind of a — when I, when I critique capitalism, people are always just like, ooh, knee-jerk reaction, “Communism doesn’t work.” I’m like, I’m not talking about communism; I’m not a communist. There are other options, generative justice being one, come to, in a moment. But I was thinking about the exploitation that exists within capitalism, and even me, with my intersectional positioning, look at my nails — the exploitation that went into them being made. Look at my iPad; look at our iPhones — the coltan that goes into our iPads, the coltan that goes into our mobile phones, fueling this terrible war in the Congo that’s affecting other women. We are, within capitalism, we are all complicit in forms of oppression, regard — of exploitation, regardless of how intersectional our individual experiences are. And that is, that is problematic.

So to me, intersectionality is part of a journey to a more just society, but it is not in and of itself, the end goal. In lots of communities in pre-colonial Africa and across the Americas, some, not all, but some Indigenous peoples, many of them practiced a gift economy. So rather than an economy that’s based on the accumulation of wealth for a small elite, society operates according to a gift economy. Rather than industrial extraction which leads to all of those forms of exploitation that I’ve spoken about (the coltan in the phone, the nails, there’s so many I can think of, I was just thinking of ones that are personal to me in this moment). So rather than industrial extraction, Indigenous societies circulated value in unalienated form through meaningful and collaborative exchange with both human and non-human (that’s the environment and animals), meaningful, collaborative exchange with both human and non-human partners.

So to finish, it’s not a question of balancing some gains for one or two particular marginalized groups within our continually exploitative society, but it’s really about shifting the operating logic on which our society operates. The flourishing of unalienated creation of value will mean social justice for all. This should be our end goal. Intersectionality can be part of the journey forwards in this direction, but we have to dream bigger and beyond.

This site uses Akismet to reduce spam. Learn how your comment data is processed.